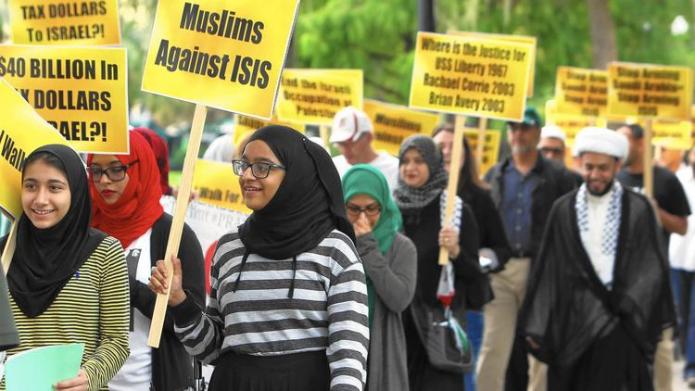 A mid a growing wave of hate crimes and anxiety over President Donald Trump’s crackdown on immigration, Central Florida Muslims have launched a campaign to promote love and understanding — especially toward their own.

One group is spending $10,000 on radio ads and interstate billboards to promote its message, a spinoff of Trump’s “Make America Great Again” campaign slogan. The effort follows six years of quiet community service projects that leaders say their non-Muslim neighbors never heard about.

“When Donald Trump the candidate wanted to ban Muslims, we knew we needed to build a bridge, to let people know our real story,” said Atif Fareed, chairman of the American Muslim Community Centers in Longwood, which is behind the effort. “And when he won the election, we knew we had to show people that we are part and parcel of making America great.”

“It’s very unfortunate, and I think it is causing a lot of anxiety and fear of the unknown,” Fareed said of the order. “We are already hearing from our members with family in those countries that, in one case, they were turned back Friday night when they landed in New York, even though they have green cards” — documentation of permanent residency in the U.S.

Central Florida Muslims said they fear the policies will only reinforce distrust and prejudice rooted in acts of terrorism by radical zealots, including the mass murder of 49 people at Pulse nightclub last June by a gunman pledging allegiance to ISIS.

“Who are the main victims of ISIS? It’s not Christians. It’s not Jews. It’s Muslims,” said Wajeeh Bajwa, president of the Orlando Chapter of the Ahmadiyya Muslim Community, which organizes a Muslims for Life blood drive every Sept. 11. “Extremists exist in every faith and religion. Personally, I think someone who joins ISIS has no faith.”

“The wrong perception of Muslims is out in society,” said Ahmed, whose wife is also a doctor. “We are a part of the fabric of this community, and we are working to make it a better place.”

The American Muslim Community Centers, which tapped its own members to pay for the new awareness campaign, put up three red, white and blue billboards along busy stretches of I-4 and two more along I-95 in Melbourne. “Making America Great with Love, Compassion & Mercy,” they read.

The radio ads, which began airing Jan. 15, note in part that “tens of thousands of patriotic Muslims have proudly served — and are serving — in every branch of our armed forces.”

For some, the campaign seems overdue. Since the American Muslim Community Centers’ birth in 2010, members have volunteered to feed the homeless, help at domestic-violence shelters and pack meals for the Longwood-based nonprofit Feeding Children Everywhere. They also started an emergency food pantry — open to anyone in need — and earlier this month they opened a free medical clinic for low-income residents, regardless of faith.

“We’re very fortunate that they’re nearby and have such a heart to serve,” he said. “We need more like them.”

Meanwhile, though, anti-Muslim sentiment has festered in recent months. In the 10 days after Trump’s victory in November, the Southern Poverty Law Center tracked a spate of 37 “hate incidents” in Florida — threats, vandalism, intimidation and violence — and at least a dozen more have occurred since then, a center spokeswoman said. In Central Florida, the incidents have involved mostly the harassment of Muslim women wearing a hijab, the traditional head and chest wrap.

But at least one local mosque has received bomb threats — as have Jewish institutions in Maitland and Orlando — in recent weeks. Bajwa said the threat was frighteningly specific.

The mosque’s leaders contacted police and the FBI and had to evacuate temporarily. No device was found, but afterward the mosque installed a new security system.

The threats haven’t stopped the group from hosting a new get-acquainted series, “Coffee, Cake and True Islam,” with other faith and civic organizations.

“Our idea is not to talk about what the specific Islamic teachings are … but to allow people to meet us informally over cup of coffee and just have a chat,” Bajwa said.

Though Muslims make up only about 1 percent of the population, their Florida numbers have roughly doubled in the past decade. In Orlando, the first Friday prayer service began in the 1970s in a small trailer on Goldenrod Road. A decade later, that group grew into the Islamic Society of Central Florida, the oldest and perhaps largest local Muslim organization, and there are now about 30 mosques.

Fareed, an airline pilot who has lived in Central Florida since 2003, said his goal in chairing the American Muslim Community Centers was to make it more proactive than its predecessors.

“Maybe other organizations were very traditional and didn’t want to highlight the things they were doing … but then what happened was that the only information most people had was negative,” he said. “When I took over the mosque, I said, ‘We’re going to change the model. We need to have better public relations.'”

For the free health clinic, the group raised $250,000 to buy and remodel an official building, which is being staffed by Muslim doctors and nurses volunteering their time. The response so far, clinic spokesman Moazzam Adnan Raja said, has been overwhelmingly positive.

Among the supporters is Rev. Bryan Fulwider, CEO of the nonprofit Building US and perhaps best known as one of the “Three Wise Guys” — along with a rabbi and imam — on the WMFE-FM radio program “Friends Talking Faith.”

“They [Muslims] have had threats saying: ‘Bad things will happen to you,’ and their response has been this redoubled effort of reaching out and helping the community,” Fulwider said. “That is what faithful people do in difficult times. And right now, I think it’s the only answer.”