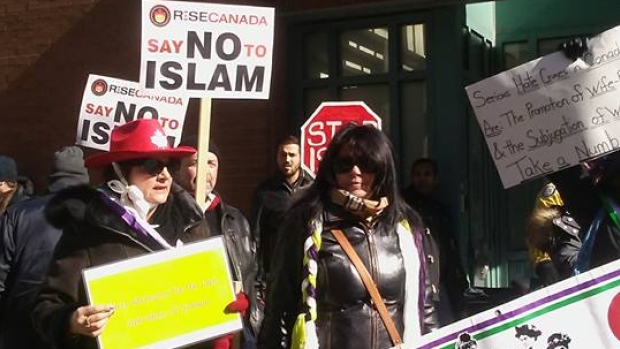 Toronto police say they are investigating not only an anti-Muslim rally that took place on the doorstep of a downtown mosque nearly a week ago, but allegations of hate speech inside the mosque as well.

More than a dozen people converged on Masjid Toronto last Friday, calling for a ban on Islam as Muslims prayed inside. Police said that prompted multiple complaints over the weekend from people in attendance that day, as well as others who were not present.

After a formal complaint was filed Tuesday, the rally is under investigation by the hate crime unit, corporate communications director Mark Pugash confirmed to CBC Toronto.

But less than 24 hours later, police received another complaint — this time for alleged hate speech inside the mosque.

Pugash would not confirm that the allegations had to do with anti-Semitic speech, but Masjid Toronto issued a statement earlier this week apologizing for “an inappropriate supplication that was offensive to those of the Jewish faith.”

Supplications ‘added without authorization’
“Masjid Toronto condemns all forms of hate and racism towards any faith group or others and is committed to offering a safe spiritual space for all congregants,” a statement on the mosque’s website says.

Muslim Association of Canada spokeswoman Memona Hossain told CBC Toronto the apology referred to prayers made by a junior employee in 2016.

“The incident occurred when inappropriate supplications, in Arabic, were added without authorization, and in contravention to MAC’s code of conduct,” the organization said in a statement. Neither the mosque nor police would specify exactly what was said.

“We know who made the comments and we have suspended the employee,” said Hossain, adding that the mosque has launched an internal investigation.

She said the organization has also extended an apology for the incident to leaders of the Jewish community, including the Toronto Board of Rabbis.

Police said both incidents are now being reviewed by its hate crime unit.

Toronto Imam Hamid Slimi said he was shocked to hear of the incident, calling it “unacceptable.”

“We must denounce any anti-Semitic act,” adding Canadian Muslims must “not see our relationship with the Jewish communities through the Middle East conflict but rather through the Canadian spirit of respect and common good in addition to the historical connection through our Common father Abraham [Peace be upon him].”

‘An aggravating factor’
Under the Criminal Code, a hate crime refers to a crime motivated by hate, which can be either violent or non-violent in nature and carried out to intimidate, harm or terrify not only a person, but an entire group of people to which the victim belongs.

In Canada, there are four offences listed as hate propaganda or hate crimes under the Criminal Code. These include advocating genocide, publicly inciting hatred, willfully promoting hatred, and mischief in relation to religious property, motivated by hate.

“We have to demonstrate that a crime has taken place and if we can show that the motivation was hate, that’s an aggravating factor that a judge can use in sentencing,” Pugash said.

But at what point does an act change from free speech to hate?

“That’s a conversation we’ve been having all day,” Const. Allyson Douglas-Cook told CBC Toronto over the weekend, calling it “a fine line.”

“If the hate crimes unit discovers evidence of hate, then the way the law works, depending on how that’s manifested, it can either be an aggravating factor in sentencing, it can form the basis of a charge,” Pugash said. “But it depends on the way in which it’s manifested.”

On Friday, some on their way to the mosque told CBC Toronto the rally blocked them from going inside for congregational prayer. Muslims hold Friday to be the holiest day of the week.

‘Celebrate Islamophobia’
Many in support of Friday’s protest outside the mosque have described it as peaceful and an expression of free speech.

A Facebook event for the rally, entitled “Defy M103 — Celebrate Islamophobia,” appears to characterize the rally as a show of support for Eric Brazau, a man convicted in 2014 of wilful promotion of hatred and criminal harassment.

Last March, Brazau lost an appeal relating to a separate 2014 incident aboard a Toronto subway, in which he denounced Islam and Muslims as part of what he termed “a social experiment.” He was convicted of mischief, disturbance and breach of probation, and sentenced to 20 months of jail time.

It’s those kinds of incidents that spurred Suraia Sahar to file a formal complaint about the rally, she said.

“I’m a Muslim who lives in Toronto, and I have to see this every single day,” Sahar said on Tuesday. “It gets emotional for me. I’m 30 years old, I’ve been dealing with Islamophobia here in Canada for half my life. Especially after the 9/11 attacks.”

Sahar said she felt especially threatened by the rally because it took place less than a month after a shooting left six men dead after an evening prayer at Quebec City’s busiest mosque.

“After the Quebec shooting massacre, I was devastated. And to see our elders from our community break down into tears after losing their friends.… it really, really hurt,” said Sahar.

“It concerns me not just personally but it makes me concerned for my family, for my friends, for my community … they have the audacity to do it less than a month after the Quebec mosque shooting.”