Thousands of people have taken to the streets in London to protest against rising sentiments of Islamophobia, racism and anti-refugee motions in the country.

Protesters gathered in London’s parliament square on Saturday as they were united against racism and Islamophobia and supportive of refugee and migrants.

They arrived at Portland Place in Central London at around midday while holding banners with slogans read, “Hands off EU workers”, “Refugees and migrants welcome here” and “Stand up to Trump.”

The rally was organized by the UK campaign group Stand Up to Racism, as part of a series of rallies taking place across Europe to mark the International Anti-Racism Day.

The demonstrations are also taken in cities such as Berlin, Vienna and Athens, as well as UK cities Cardiff and Glasgow.

“It’s the fourth year that we’ve held this demonstration now for UN anti-racism day, but we think this year is more important than ever,” said Zakariya Cochrane, assistant convener for Stand Up to Racism. 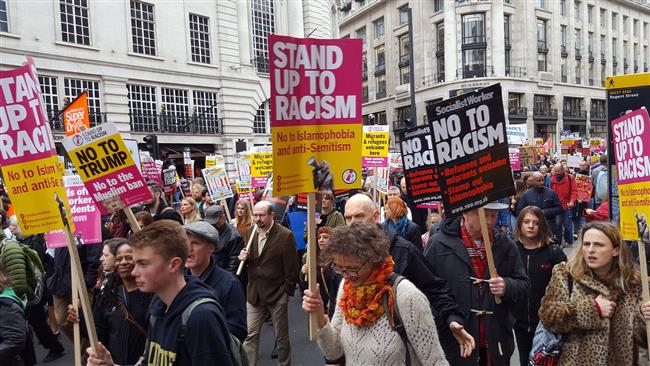 He said that this year “is really about anti-racists uniting and going on the defensive on all the issues: child refugees, defending migrants and refugees, the divisive policies of Donald Trump and Theresa May.”

Ahead of the rally, the UN Officer for Equalities, Harish Patel, said according to a report by the TUC, “one in three black, Asian and minority ethnic people experienced or witnessed racist abuse following the EU referendum.”

Protesters also rejected remarks made by Prime Minister Theresa May who blamed refugees for the problems her country is facing. They said the problems are provoked by the government’s austerity measures and financial crisis. 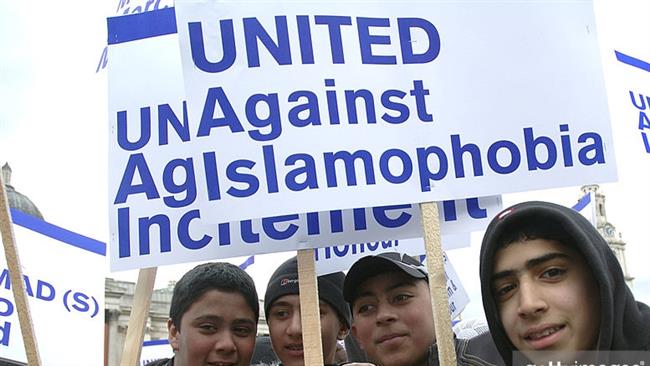 May is also criticized for the way it is handling Brexit. Despite warnings that leaving the EU would severely damage London’s position as a financial hub, May has promised to begin the Brexit process later this month and complete it by 2019.