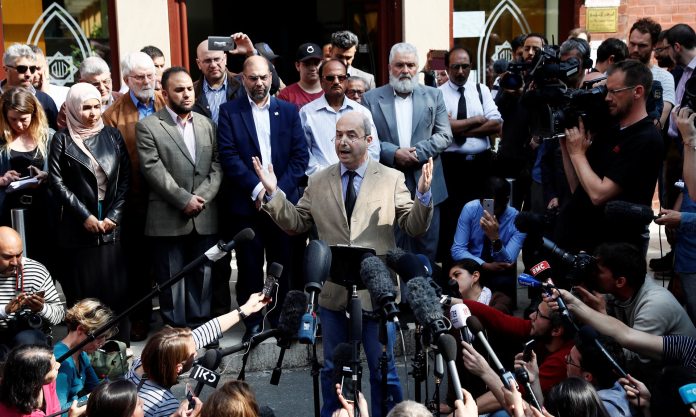 Muslim leaders in Manchester have expressed concern about a number of Islamophobic incidents in the city, from verbal abuse to criminal damage to mosques.

Senior members of the Muslim community say that they have received reports of abusive behaviour since the attack on Manchester Arena earlier this week.

Fawzi Haffar, trustee of the Manchester Islamic Centre in Didsbury, where Salman Abedi, the Manchester Arena bomber, is understood to have prayed, said: “We are concerned about reports we are receiving about anti-Muslim acts. These are terrible anti-Muslim acts ranging from verbal abuse to acts of criminal damage to mosques in the area and outside the area. We do encourage any incidents to be reported as a hate crime.”

Read more
Mohammed Ullah, Muslim chaplain at University of Manchester, said that he had heard reports of a Muslim girl being spat at and another Muslim person being told to “go home”. An arsonist attacked a mosque in Oldham, Greater Manchester, shortly after the atrocity.

“We hear reports but many people are very scared to talk about the problem or they don’t want to cause a fuss,” Ullah told the Guardian. “We receive reports but I think incidents are under-reported.”
“Islamophobic attacks have increased in the last few years exponentially,” he went on. “I tell Muslim students to report these hate incidents when they happen. Be vigilant against it and don’t allow hate to divide us.”

Speaking outside the Didsbury mosque, Haffar sought to dispel reports that Abedi had worked at the centre, and said: “We express concern that a small section of the media are manufacturing stories and making unfounded points.”

He also expressed his outrage at the attack, calling it a “horrific atrocity” and saying “this act of cowardice has no place in our religion or any other religion”. He encouraged anyone with information to contact the police.

But Ullah said that Muslims should not be expected to apologise for the actions of extremists.

“I say to Muslims you should not have to apologise for the actions of individuals,” he said. “No other community has ever been held to account like this. Let me be clear – what happened on Monday was a crime of epic proportions. It was epic, evil and one we condemn with the strongest condemnation.

“But let’s also be clear about this – why do we then have to stand up and say: ‘we apologise’? It’s not my fault. It’s not the fault of the religion.”

The attack on the mosque on Villa Road, Oldham, at around 3am on Tuesday came just hours after Abedi’s bomb detonated causing chaos throughout the city. CCTV shows a man walking up to the front door and setting fire to it.

DI Ian Harratt of GMP’s Oldham borough, said: “In the wake of the atrocities that happened at the Manchester Arena, this man thought it was acceptable to deface and set fire to a local mosque.”

“This behaviour will not be tolerated,” he went on. “We are standing shoulder to shoulder with the community in Oldham and all the people who treasure this mosque as a place of worship.”

Fiyaz Mughal, founder of Tell MAMA, which monitors and records Islamophobic hate crimes, said there had been a “measurable” spike in incidents targeting Muslims in last 24 hours, including verbal abuse, spitting and headscarfs being pulled from the heads of Muslim woman.

He said: “After the major terrorist incident we have seen a measurable spike in anti-Muslim hate incidents coming into Tell MAMA.

“The pattern has been followed in this case, with a time lag and then a measurable spike of hate incidents. These range from general street level abuse to online hate and threats and the Oldham mosque case of arson after Manchester. So there is a clear measurable spike.”

Mughal said there was not as dramatic a spike after the Westminster attack in March that claimed the lives of five people, including a police officer.

“Therefore, who is attacked through terrorism seems to be related to how much of a blowback effect there will be against communities and Muslims, if a member of the community is the perpetrator. So each situation is unique, but Manchester clearly affects us all given that innocent young children and their parents were targeted.”