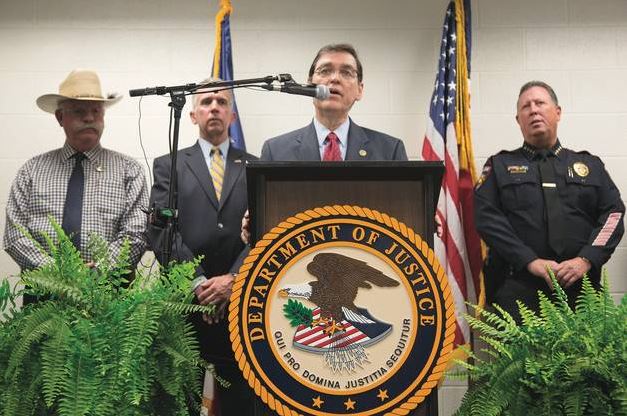 Five months after flames ripped through a Victoria mosque, arson suspect Marq Vincent Perez has been charged with a hate crime.

“Intentionally defacing, damaging or destroying a religious house of worship, such as a mosque, here is a federal crime, a crime that is intolerable in a free and open society of the type that we live in,” said Abe Martinez, acting U.S. Attorney for the Southern District of Texas.

Martinez and local, state and national law enforcement officials announced the charges at a Thursday afternoon news conference in the basement of the Martin Luther King Jr. Federal Building in Victoria.

Although Perez was arrested March 3, prosecutors had only connected him to the Jan. 28 arson of the Victoria Islamic Center through the testimony of a federal special agent – until now. Investigators spent those months interviewing “countless” sources and analyzing evidence, Martinez said.

These are very difficult crimes to prove,” Martinez said.

Perez, 25, of Victoria, is charged with damage to a religious property, a hate crime; use of fire to commit a federal felony, or more simply, arson; and possession of an unregistered destructive device, which is not connected to the mosque fire, Martinez said.

“This indictment should send notice to violators that such crimes will not be tolerated,” Martinez said.

Perez’s indictment hints at the possibility of accomplices, and the descriptions of his charges include the phrasing, “the defendant Marq Vincent Perez, aided, abetted and assisted by others known and unknown to the grand jury.”

Although Martinez said others have not been charged in relation to the mosque arson, he said future prosecution is possible.

“The investigation continues,” he said.

After the news conference, Perez’s attorney, Mark Di Carlo, who was present, said the event was “political” and an example of the improper manner in which prosecutors have proceeded.

“We just want a fair trial,” he said.

Thursday, Di Carlo filed an objection to the news conference, arguing he and his client were not notified of the event. Di Carlo said he learned about the event only when a reporter called him at 10:04 a.m.

Perez, who remained in the DeWitt County Jail as of Thursday evening, likely was not aware of his indictment at the time of the news conference, Di Carlo said.

Additionally, Di Carlo said, the setting of the prosecution’s news conference at the U.S. Courthouse, which is supposed to serve as neutral place, was unfair.

“Why can’t I have a press conference there?” he asked.

Seeking the charges was important, Martinez said, considering the sizable populations of Muslims living in the Southern District of Texas and their numerous contributions to communities such as Victoria.

But Di Carlo said he found Martinez’s comments worrisome and indicative of what he described as the politicization of the case.

“Why would they open up a press conference … with diversity?” he said. “What does that have to do with my client’s crime?”

Abe Ajrami and at least two other members of the Victoria Islamic Center attended the news conference. After its conclusion, Ajrami said he was pleased, especially with the hate crime charge.

Although Martinez declined to comment on exactly what evidence prosecutors will use to demonstrate Perez was motivated by hate, he said the very nature of the building burned is meaningful.

“By definition, burning a church because (of its) character and the people that worship there is what makes it a hate crime,” Martinez said.

But Perez’s attorney said he found that connection tenuous.

“What if it had been a Baptist church? Would that make it a hate crime?” he said.

But Special Agent Rick Miller of the Bureau of Alcohol, Tobacco, Firearms and Explosives testified at a March detention hearing that Facebook comments showed the defendant may have targeted the mosque because of a fear and dislike of Muslims.

Ed Michel, FBI Assistant Special Agent in Charge, said during the news conference that he couldn’t speak with certainty on whether the Victoria Islamic Center arson was part of a larger, national trend of violence against Muslims. But, he said, federal hate crime laws are one tool in preventing violence against Muslim-Americans.

According to the Council on American-Islamic Relations, “dozens” of instances of crimes targeting mosques in the U.S. have occurred from January to March.

Ajrami said he considers Victoria’s case lucky to be among those that have resulted in hate crime prosecution.

“There are many, many instances of hate nationwide. Many mosques were burned,” he said. “This is one of the (instances) where actually somebody was charged, and that is fantastic.”