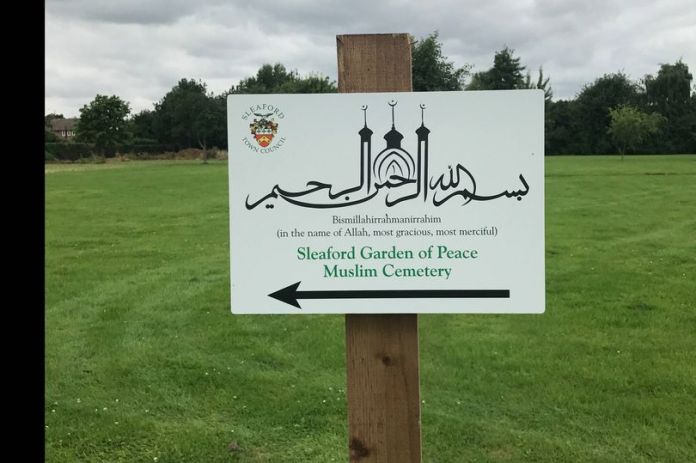 Vandalism of signs at a Muslim burial area is being treated as a hate crime by police.

Sleaford Town Council has revealed that graffiti was daubed on two signs and others were vandalised at the town’s cemetery between September 19 and 20.

It said in a statement on its Facebook page: “The town council is disappointed to report that signage to the Muslim burial area at Sleaford Cemetery was vandalised yesterday. Attempts were made to physically remove some of the signs and graffiti was found on two others.

“The matter has been reported to the Police.”

Police have confirmed they are treating the vandalism as a hate crime.

Clerk to Sleaford Town Council, Kevin Martin, said the vandalism was found by cemetery staff when they arrived for work.

He said: “Two of the five signs directing visitors to the Muslim Burial area had undecipherable graffiti on and physical attempts had been made to remove the signs from three other posts including the removal of nuts and bolts.

“As the signs are some distance apart whoever carried out the offence would have had to walk around the cemetery grounds.

“The matter was reported to Police via the 101 service and an Officer from Lincolnshire Police visited the cemetery site within an hour.

“Council staff have managed to remove the graffiti and the remaining signs have been re-fixed to their posts. Lincolnshire Police have confirmed that the incident has been logged as a hate crime and thus a criminal offence.”

Tanweer Ahmed from the Islamic Association of Lincoln said he could not understand why anyone would target a grave.

He said: “It’s sad to see things like that clearly, but whether it’s Muslims in Sleaford or Lincoln, we all work together.

“These people [who have done the vandalism] are just trying to create problems for us.

“We are grateful that Lincolnshire police are looking at these issues.”

He added: “It’s very disturbing. Why can someone do anything like that where people [have been put to rest].

“I am quite upset about this to be honest – I feel sad.

“It’s like people try to divide or create problems.

“They shouldn’t be doing anything like this where people have died.

“It is disrespectful to all of us there should be respect for those who have died.”

People have also taken to the town council’s Facebook page to show their disgust.

And Harriott Brand added: “What on earth is the matter with people, no respect for the dead – if it was their own families they would be the first to complain.”

If anyone has any information regarding this incident they are asked to contact Lincolnshire Police quoting case number 17000403974.