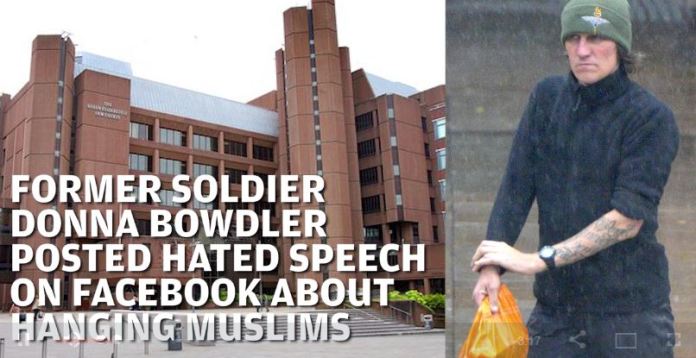 A former soldier who posted hate speech on Facebook about hanging Muslims and slaughtering refugees was today spared jail.

Donna Bowdler avoided prison last September after making vile remarks on the social network about the death of Muslims and destruction of mosques.

But while on bail over those offences, dating from October to December 2015, she made yet more offensive posts, between January and August 2016.

She wrote about slaughtering refugees and later said: “Come and have a go if you think you’re hard enough gunna be so much fun hanging Muslims”.

In response to an article about a flag being raised at Rochdale Town Hall to mark the Independence Day of Pakistan, she posted: “This is high treason.”

Lee Bonner, prosecuting, said Bowdler, of Samuel Street, Warrington , discussed “every Muslim in Britain getting waxed”, which was “urban slang for the act of being killed”.

Police discovered an arsenal of weapons at her home, including knives, machetes, axes, a baseball bat, bows and arrows, stun grenades and a throwing star.

Bowdler admitted publishing written material which was threatening, abusive or insulting with intent or likely to stir up both racial and religious hatred.

Police first investigated her in 2015 after she sent a “concerning” signed letter to the commanding officer at an army barracks.

When Cheshire Police officers visited her house, she was asked if she had any weapons and revealed a legally-owned air pistol and air rifle.

But she failed to mention a pepper spray canister – bought from Amazon for £11 – which was discovered along with three bags of cannabis.

She was bailed pending further enquiries and the initial series of posts were found on her Facebook account when it was examined.

He said there were no offences listed on her record and no mention of any tours of duty, despite her suggesting she had served abroad.

He applied for a forfeiture and destruction order for the weapons subsequently found in Bowdler’s home, over which she was not charged.

Claire Jones, defending, said her client had references from people including an ex-forces support network representative.

Judge Anil Murray said the posts were “grossly offensive” but Bowdler had not repeated the “serious offences” and could be rehabilitated.

He said: “These were vile utterances from you and you ought to be deeply ashamed of yourself.

“They are designed to stir up racial and religious hatred. This type of material can incite others not just to feel hatred, but to commit acts of violence.”

The judge said she demonstrated remorse, was no longer associating with the same people and was doing voluntary work.

“You have a wide range of psychological and emotional difficulties. It’s said if you are sent to prison, one could expect the emergence of self harm.”

He added: “You need to understand that you have come very close to being sent to prison. If you breach this order, you and I will meet again.”