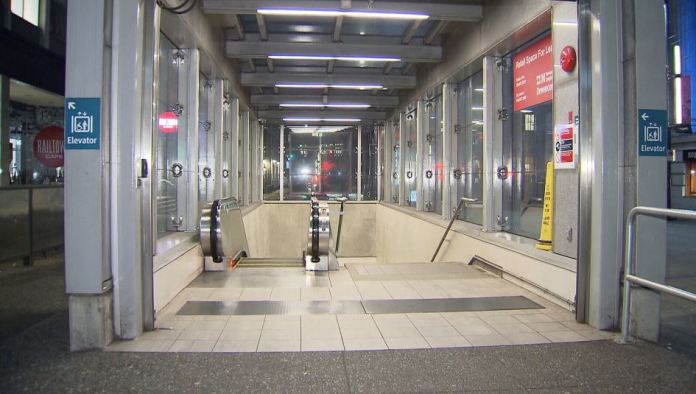 Transit police are investigating after a 17-year-old Muslim girl says she was verbally and physically assaulted on a Vancouver train because of her faith.

In a Facebook post published on Tuesday, the teen described boarding a Canada Line train at Waterfront Station on her way home from work Monday evening.

Just before 10 p.m., the girl said she sat down on the train when an unknown man approached her and began yelling profanities at her. The stranger allegedly threatened to kill her and all Muslims.

Moments later, the teen said the man grabbed her hijab and tried to pull her head towards his crotch, before striking her across the face.

“He hit me,” she wrote on the post. “And everyone watched as he did so. Everyone stayed seated and did not utter a word but one man.”

He came over and intervened, she said, standing between them until the man who attacked her got off at Vancouver City Centre Station. That’s when she managed to take some photos that she also shared on Facebook.

The girl said the Good Samaritan got off with her at Yaletown Station and stayed with her until police and paramedics arrived.

The teen said she’s convinced she was targeted because she was wearing a hijab.

“It saddens my heart that so many people watched as I was being attacked and assaulted simply because of a man who knew nothing of me but chose to judge me based on the hijab I wear,” she said.

The girl’s brother spoke to CTV Vancouver on Tuesday and said he believes it was a hate crime.

“It was definitely hate-driven, hate-fuelled,” he said. “He really segregated and singled out a person of Muslim ethnicity. It’s not fair at all.”

Although he said he was disheartened that only one person on a crowded train stepped in to help his sister, he’s grateful that he did.

“He did the right thing and he was very, very pivotal in how this situation could have played out,” he said. “She would have never gotten the photo [of the suspect] if he didn’t intervene.”

The teen’s brother met her at the train station after the alleged incident and said she was “shaking uncontrollably.” He said he’s most concerned that his sister will be too afraid to go out in public now.