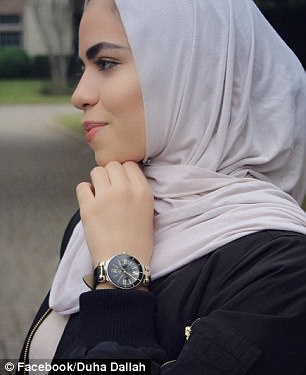 A woman who was offered employment at a Texas Dillard’s sued the department store, claiming she lost her job because of religious discrimination.

It seems Duha Dallah, 19, had already begun training for a sales position at Firewheel Town Center in Garland before a children’s department manager informed her she would not be permitted to wear a head scarf on the floor.

In a follow-up meeting, the Muslim teen told the store manager about the conversation – while noting the hijab was a required part of her religion.

The store manager apologized and told her the individual had not been fully informed of store policy.

However, later, Dallah received an email from the store manager, who retracted her employment offer and said other candidates were being interviewed for the position.

‘I believe I lost the sales position because Dillard’s did not want a Muslim woman wearing a headscarf to work on the sales floor,’ Dallah said, according to Dallas News.

‘I recently contacted CAIR-DFW because I was refused employment at Dillard’s due to my headscarf.

‘I am seeking the justice I deserve With the help of my attorneys Nikiya Natale and Christine Hopkins, they were able to file a charge of discrimination with the Texas Workforce Commission against Dillard’s.’

Dallah felt the managers were ‘invalidating’ and ‘belittling’ her over her religious beliefs.

‘I was honestly speechless at the time and could not believe what I was hearing. It made me feel as tho my religion is what is stopping me from pursuing a job in America.

‘I don’t think any woman should ever have to go through that. I felt the hate. It’s extremely heartbreaking that a place my family and I love to shop at would discriminate against me because of my head scarf.’

She added she was ‘overqualified’ for the position and ‘had the job in her hand’ prior to the disagreement.

Garland Dillard’s has not yet commented on the matter and could not be reached late Friday.