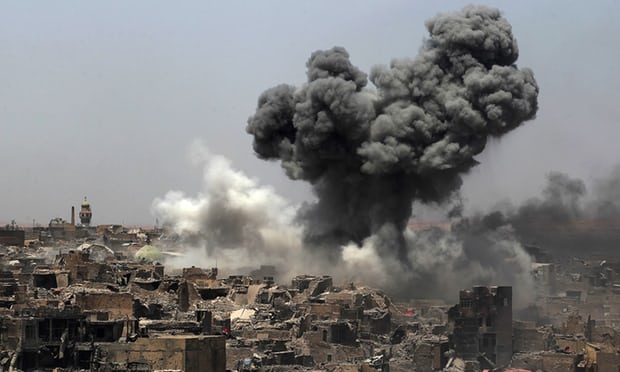 More than 15,000 civilians were killed by explosive weapons in 2017, a jump of 42% in a year, according to a global survey seen by the Guardian.

The rise – driven by airstrikes, which killed almost double the number of civilians in 2017 compared with the previous year – coincided with US-led military operations to reclaim the Islamic State strongholds of Mosul, in Iraq, and Raqqa, in Syria.

MPs said the figures were “deeply concerning” and raised questions over the transparency of legal criteria used by the Ministry of Defence to determine whether an individual is an Isis combatant.

The UK has said it has no credible evidence of its airstrikes resulting in civilian deaths, while the US military has revealed it unintentionally killed at least 801 civilians in Syria and Iraq.

The global survey, compiled by Action on Armed Violence, an organisation that highlights civilian harm from explosive weapons, suggests the civilian death toll from air-launched explosives rose by 82%, from 4,902 in 2016, to 8,932 in 2017.

The worst impacted countries were Syria, where civilian deaths increased by 55% to 8,051, Iraq, where there was a 50% increase, to 3,271, and Afghanistan, where 994 non-combatants died.

Clive Lewis, chair of the all-party parliamentary group on drones, called on the MoD to reassure the public over its commitment to reducing civilian harm by revealing how enemy combatants are identified.

“One of the challenges that has emerged from our military efforts against Isis in Iraq and Syria is a lack of clarity regarding the legal criteria by which the MoD determines an individual to be an Isis combatant,” Lewis said.

The figures outlined in the survey, compiled from English wire reports of individual incidents, are significantly higher than official statistics but below those of other monitoring groups.

According to Airwars, which monitors deaths in Iraq and Syria, the estimated number of alleged civilian deaths as a result of US-led military operations against Isis in Iraq and Syria last year was between 11,000 and 18,000. An Associated Press report last month put the estimated number of civilian deaths in Mosul alone at 9,000.

Iain Overton, executive director of Action on Armed Violence, said the data threw doubts upon the MoD’s claim that it had no evidence of its airstrikes killing civilians in Iraq and Syria.

“In an attempt to combat terrorism, forces are using air weapons against groups they consider a threat and, in doing so, they are killing an awful lot of civilians,” Overton said. “It raises fundamental questions about the Royal Air Force’s claims that there is no evidence civilians are killed in its operations.”

Overton blamed a “very nasty and bloody” year on increased airstrikes and the continued use of improvised explosive devices by terrorists. The latter killed 3,874 civilians in 2017, a similar number to those killed the previous year.

“This is about urban warfare and that’s why we are getting crazy numbers,” said Airwars director Chris Woods.

“War is moving into cities. It doesn’t matter whether it’s Russia or the US-led coalition or ground forces leading the assault, the outcome for civilians under attack is always dire.

“There seems to be no interest from the coalition or the Iraqi government in properly understanding the level of civilian deaths. We’re becoming too complacent about urban warfare, and militaries and governments are downplaying the effects.

Thangam Debbonaire, chair of the all-party parliamentary group on refugees, called on the UN and all national governments to recognise and reduce the harmful impact of explosives on civilians.

“These figures make upsetting reading,” Debbonaire said. “Behind the numbers are people, civilians suffering and increasingly targeted in armed conflict. Adults and children are being killed, maimed and bereaved, and survivors living with the psychological effects.”

In response to calls to reveal how enemy combatants are identified, a spokesman for the MOD said it does not comment on rules of engagement. He added: “We’ve not seen any evidence that we have caused civilian casualties. We do everything we can to minimise the risk to civilian life from UK strikes through our rigorous targeting processes and the professionalism of the RAF crews. Reports of civilian casualties are and will continue to be taken very seriously and we will investigate all credible claims.”

The US military was contacted by the Guardian for a response but did not respond in time.