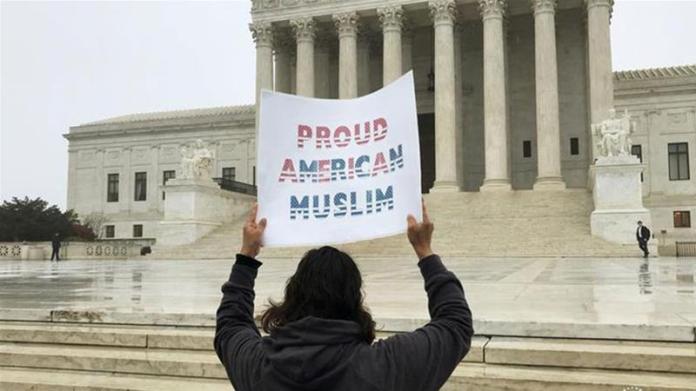 Republican candidates claiming that Islam is a political ideology rather than a religion. Super PACs broadcasting a slew of television ads linking Democratic candidates to “terrorism”. Anti-Muslim campaign fliers sent out in areas across the country.

With the US midterm elections slated to take place on November 6, a new pre-election report blasted these types of anti-Muslim campaigning tactics as a “losing strategy”.

Published on Monday by the Muslim Advocates civil rights group, “Running on Hate” describes a swell of anti-Muslim campaign rhetoric throughout the era of US President Donald Trump.

It documented 80 instances of “clear anti-Muslim rhetoric” employed by political candidates in 2017 and 2018, adding that 64 percent of the candidates held office before or enjoyed a presidential endorsement.

Scott Simpson, the public advocacy director of Muslim Advocates, explained that anti-Muslim candidates have vied for “every level of government” office in “every region” of the country in the past two years.

“Behind the world view pushed by these candidates is something very troubling: Muslims and non-Muslim allies are conspiring to take over the government to replace the constitution with Sharia law.”

Republicans comprised all but two of the 73 cases in which the report identified party affiliation, and more than a third of the candidates listed alleged that Muslims are innately violent or pose a physical threat.

“These conspiracy theories have had a constituency within the Republican Party for years,” Simpson said, adding: “Trump is an important part of this, but he didn’t originate it.”

But with only 11 to 14 percent of the candidates listed in the report forecast to win, Simpson argued that targeting Muslims has proven to be an ineffective electoral strategy.

“The vast majority of them are losing or are projected to lose in November,” he said. “What we saw in this report, and what we see every day, is counter to the conventional wisdom about this: The assumption that most Americans don’t like Muslims is incorrect.”

“It has absolutely everything to do with the fact that Ammar Campa-Najar has current, existing relationships with the [Palestine Liberation Organization] and [the Council on American Islamic Relations],” he said, the latter referring to the Muslim civil rights group.

Earlier this year, failed South Dakota congressional candidate Neal Tapio, who lost in the Republican primary vote, claimed the founder of a Sioux Falls mosque was potentially linked to the Palestinian organisation Hamas.

The evidence? Tapio’s ad said the mosque founder’s scarf looked like one worn by Hamas members. The video concluded: “Should we be concerned?”

During the 2016 presidential race, Trump promised to ban Muslims from entering the US and suggested a database to keep track of Muslim Americans.

The following year hate crimes targeting Muslims spiked by 15 percent, according to a Council on American Islamic Relations (CAIR) report.

Yet as anti-Muslim rhetoric balloons and hate crimes grow, a record number of Muslim Americans have entered political races across the US.

Once in office, Trump implemented a travel ban, restricting travel to the US for nationals of six Muslim-majority countries.

Prompted to run, in part, by Trump’s anti-Muslim policies and comments, around 90 Muslims ran for office on the local, state and national levels in 2018, according to a Jetpac report published earlier this year.

Alia Salem, a North Texas-based Muslim American and social justice activist, explained that civic and political organising among Muslims were already on the rise during former President Barack Obama’s time in the White House, during which the number of anti-Muslim hate groups grew massively.

“With respect to the growing tension that Muslims from every different part of our community – conservative, liberal and beyond – feel, a switch was flipped, especially since Trump’s election,” she told Al Jazeera.

“It’s not just about voting any more,” she said. “We need to actually write policy and be on the front lines of supporting people who advocate for our community.”