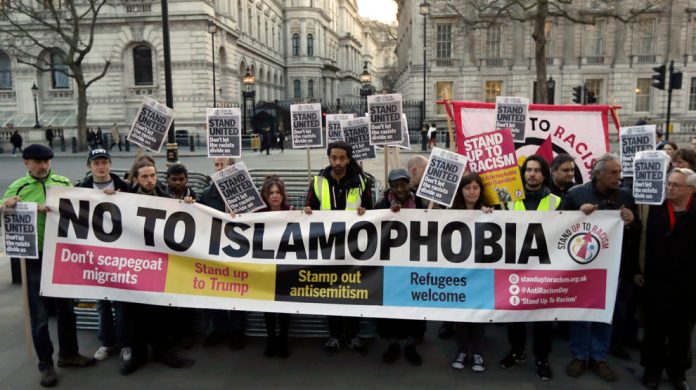 A new report finds that about 35 percent of British people think that Islam is a threat to the British way of life in the wake of 2017 terrorist attacks and that anti-Semitism on the political left is an increasing issue in the U.K.

The anti-fascist group Hope Not Hate’s annual “The State of Hate” report, published Monday (Feb. 18), based on a survey of 10,383 Brits conducted in July last year, found that anti-Muslim prejudice has hardened in the past eight years and, among far-right groups, supplanted fears of increasing immigration.

Among Britons who voted for the center-right governing Conservative Party in 2017, nearly half — about 49 percent — agreed that Islam threatens British culture in the more recent study. About 22 percent of those who support Britain’s main opposition Labour Party agreed.

“Unless the Conservatives have chosen to cynically abandon the Muslim vote in upcoming elections to solidify their hold on anti-Muslim supporters, they must stop signalling to voters they find Islamophobia acceptable within its ranks and visibly address the growing problem,” the report’s authors warned.

About 32 percent of English people also believe Britain has “no-go areas” where non-Muslims cannot enter and where Shariah law rules. Among Conservative voters, that number is 47 percent.

“It’s important to call out these false narratives of  ‘no-go zones,’” said Todd Green, an expert on Islamophobia who visits the so-called zones as part of teaching his Luther College students about Islam in Europe. “It’s been debunked repeatedly by mainstream media reports and other law enforcement sources, but in far-right circles and in tabloid news articles, the narrative persists.”

Hope Not Hate’s survey found that attitudes toward Muslims in Britain had generally become more positive between 2011 and 2016, but a string of terror attacks in the U.K. in 2017 turned the tide.

A 2017 poll by the group showed that 42 percent of English people said their suspicions of Muslims in Britain had increased as a result of the recent terror attacks; a quarter said Islam is “a dangerous religion that incites violence,” and over half said Islam poses a serious threat to Western civilization.

“The 2017 terrorist attacks in Britain — the London Bridge attack, the Westminster attack, and the Manchester attack — reinforced the dominant narrative that Islam is prone to violence and therefore Muslims are a suspect population who represent a threat to the British way of life,” Green explained.