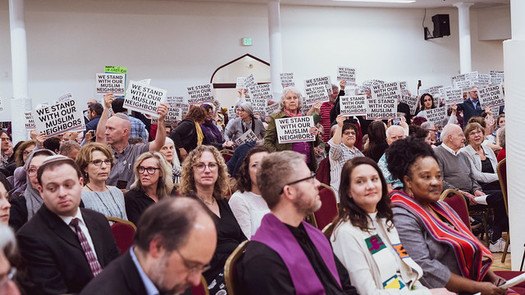 Muslims in Washington state are building bridges with their neighbors in a new series launching today in Tacoma. Muslim organizations, alongside the Associated Ministries of Tacoma-Pierce County, hold the first “Sharing Our Stories – Meet Your Muslim Neighbors” event at Skyline Presbyterian Church. Head of the American Muslim Empowerment Network at the Muslim Association of Puget Sound Aneelah Afzali said the goal is to find common ground with people through personal stories. She’s seen this kind of relationship building work as an antidote to Islamophobia in the past. Last year, Afzali spoke with two women at a Longview event who never had met a Muslim.

“They actually cried to me. They admitted that they had hatred in their heart, that they had fear in their heart and that that two hours really removed that and they gave me a hug,” Afzali said. “I mean, they brought me to tears. It was a profound and powerful moment and it just reminds me of the power that personal stories and those personal relationships have.”

Afzali said the goal is to bring this series to more rural and conservative parts of the state. A Seattle-based public relations firm created videos of three Muslim individuals for the event. Afterwards, there will be a panel discussion and then a chance for people to speak with folks of different faiths directly.

Afzali said she finds this type of event necessary as political divisiveness and Islamophobia ramp up around the country. Along with an increase in attacks, an investigation by the Council on American-Islamic Relations found anti-Muslim organizations are making big money. The report “Hijacked by Hate” said mainstream philanthropic institutions funneled at least $1.5 billion to a network of 39 anti-Muslim groups between 2014 and 2016.

Afzali said that amount of money, combined with a misunderstanding of the religion, is a recipe for disaster.

“So when this is happening and people don’t have the personal connections with people who they know, it allows for fear and hatred and even violence to grow,” she said. “And we’re seeing the consequences of that all around us.”

The Islamic Center of Tacoma and Council on American-Islamic Relations-Washington also are hosting the “Sharing Our Stories” event.