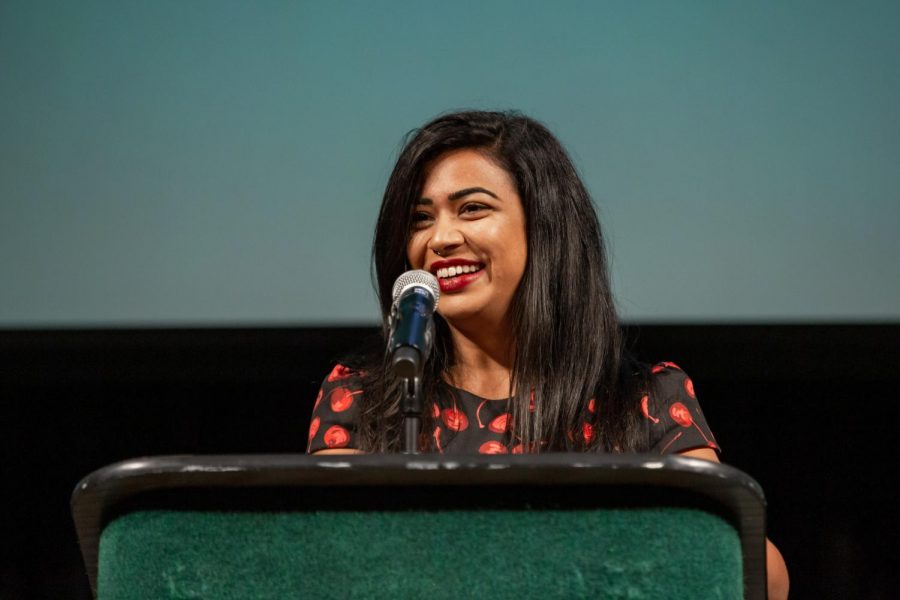 The book is about analyzing racism and politics in America that contributed to Islamophobia and later, motivated respectability politics.

Sac State student and anthropology major Andrea Ortega  came to the event to further understand globalization and its ramifications on minorities.

“I’m here to get more information about globalization,” Ortega said. “I’m an anthropology major so I’m learning a lot about race and global politics.”

Kazi was the first speaker of the semester for  the “Green and Gold Speaker Series” at Sac State, organized by the Centers of Diversity and Inclusion, which includes the PRIDE Center, the Women’s Resource Center and the Multicultural Center.

The Green and Gold Speaker Series “features intersectional scholars, artists, writers, and thought leaders” according to the Centers’ annual report from the 2017-2018 school year.

Kazi said that the portrait of American democracy as an institution that vouches for all its citizens despite their beliefs, race or class, is incorrect. Rather, she said, racism is built into the American regime.

“All forms of racism (are) systemic. Islamophobia is baked into American culture and politics,” Kazi said. “For instance, when you think about how the word terrorist is used, it is usually only used in media and policy circles to talk about Muslims. The word terrorism itself is a racial codeword.”

Discrimination toward Muslims in the United States began long before 9/11, Kazi said. Earlier examples, like the Israel-Palestine War and the Iran Hostage Crisis show discrimination dating back to the 1960s.

“9/11 intensified all of those things but it didn’t create Islamophobia, it existed long before. In the US context, we are talking about a nation that is steeped in white supremacy,” Kazi said. “So when you have that as the foundation, then of course there is going to be hostility towards any Muslims and any racialized others.”

Kazi brought up the creation of the Office of Homeland Security after 9/11 and argued that it has had wide-ranging ramifications not only on Muslims but on other minority groups within the United States.

“Because of a fear of ‘Muslim Terrorists,’ Homeland Security is now devastating the lives of Latin-American migrants,” Kazi said.

Kazi said that people of color within the US should educate themselves on the history of racism within the country.

“She was really real,” Aquayo said. “She took it back to colonialism, which, that’s the roots of our problems. And a lot of people ignore it.”

After the seminar, Kazi took questions from the audience and encouraged them to buy her book.