Geneva: Seeking to galvanize an international response to allegations of widespread abuses, human rights groups on Monday called for a United Nations investigation into China’s mass detention of Muslims in the western region of Xinjiang. The rights organizations urged the UN to set up an international fact-finding mission during its session that starts at the end of February. END_OF_DOCUMENT_TOKEN_TO_BE_REPLACED

It is no surprise the Saudi propaganda machine has come after US House Representatives Ilhan Omar and Rashida Tlaib. END_OF_DOCUMENT_TOKEN_TO_BE_REPLACED

Because of the “see something, say something” diligence of students at Greece Odyssey Academy in Monroe County a dastardly plot was uncovered by Greece Police. They discovered that four young men, aged 16 to 20, were planning to attack a Muslim community in Delaware County. During the investigation, police found that the men were deadly serious and in possession of three homemade explosive devices and 23 firearms. END_OF_DOCUMENT_TOKEN_TO_BE_REPLACED

Anti-Muslim sentiment is on the rise across Europe, particularly in Germany, home to more people of Turkish origin than any country outside Turkey. END_OF_DOCUMENT_TOKEN_TO_BE_REPLACED 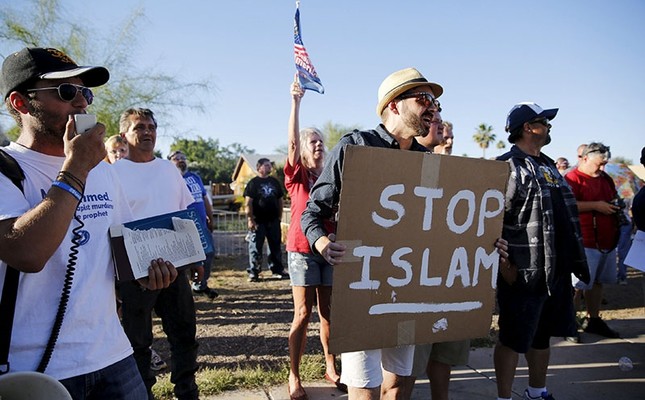 For quite some time, Islamophobia has been growing strongly in the West and has continued to take root through intensive campaigns and public discourses disseminating the fear of Islam, and through a significant number of incidents targeting Muslims, mosques, Islamic centers, Islamic attire, and Islam’s sacred symbols. Reports and evidence reveal that negative sentiments toward Islam and Muslims keep expanding in the minds of mainstream Westerners, through mistrust toward Islam and its adherents. Particularly during the last few years, Islamophobia has reached an intractable point as it continues to grow, despite up-and-down indicators from time to time. END_OF_DOCUMENT_TOKEN_TO_BE_REPLACED